There’s an old saying in Africa that every elephant path leads to water.

Fly over any wilderness area populated by elephants and, particularly in the dry season, you’ll see that every waterhole has a myriad of elephant paths radiating out into the surrounding grasslands and woodlands like spokes on a bicycle wheel – only less uniform and a lot more random.  You’ll certainly see it clearly on our Tasimba flight over the Hwange National Park into our home camp, Linkwasha – aptly named ‘Elephant Paths’. 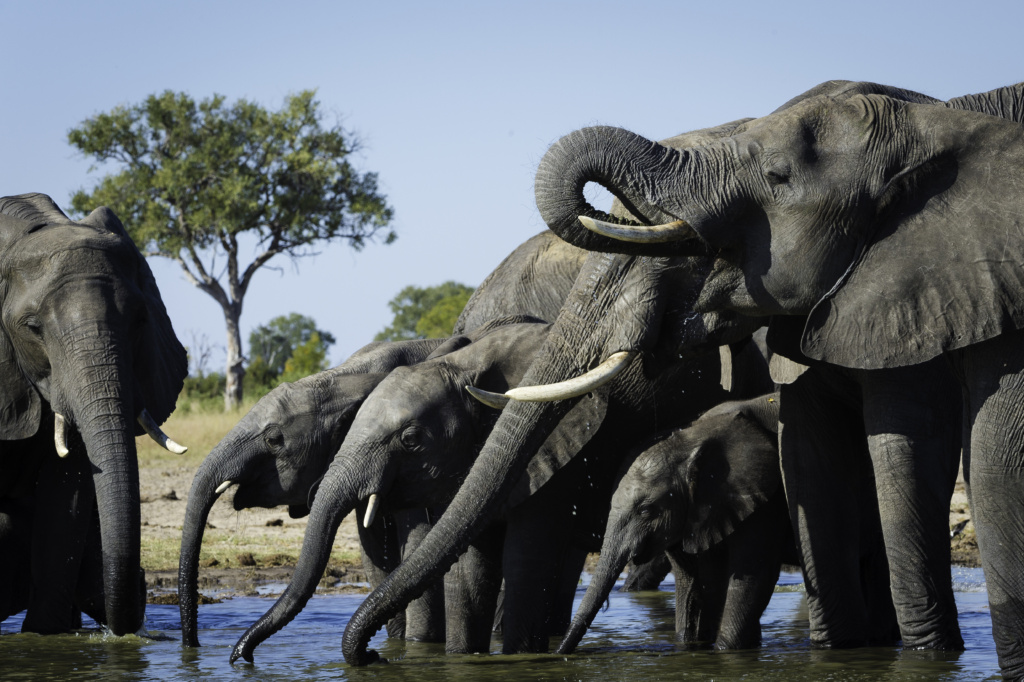 But elephants’ need for water goes far beyond just drinking it.  They walk in it, play in it, roll in its mud, spray it all over their bodies – and effortlessly swim across rivers and lakes using their trunks as snorkels.

On our Tasimba safari last month, while gathering on the open deck at Linkwasha for our afternoon safari, we were completely mesmerized watching family after family of majestic elephants walking purposefully to the pan (waterhole), just fifty yards from camp.  It was like a well-orchestrated parade.  As each family of between 10 and 20 adults, juveniles and calves vacated the water, the next arrived, drank their fill, sloshed around for a few minutes and then they too moved off to make room for the next family. 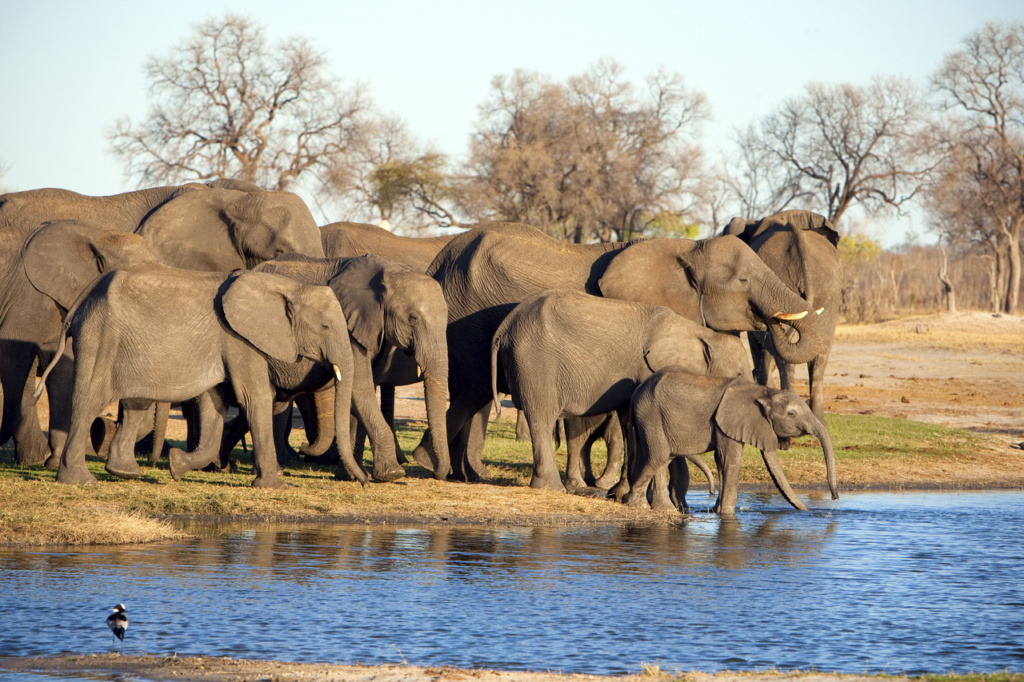 At one point when there were about 50 elephants around the waterhole, a juvenile elephant started a huge ruckus, trumpeting and charging around in the water.  Then he spotted an adult female walking away a couple of hundred yards off and took off at top speed after her, screaming loudly.  When he got close, he suddenly realized “You’re not my mom!” and, highly agitated, went trumpeting back to the water. He was just like a kid lost in the mall and some mothers in our group were beside themselves in sympathy! Soon he picked up the scent of his own family, who were by now several hundred yards away in a completely different direction, and he raced off to rejoin them!  The similarity between man and beast was not lost on any of us.

While this was going on, two Tasimba members sat on the edge of the tiny camp swimming pool with their feet in the water, fascinated by the continuous stream of elephants to the pan.  That’s when a pure ‘Africa moment’ happened.  One family of about ten elephants peeled off the ‘parade route’ and nonchalantly ambled straight towards the camp.  Calmly, deliberately, they came up to the pool, dipped their trunks into the cool, clean water and slaked their thirst in great slurping gulps. 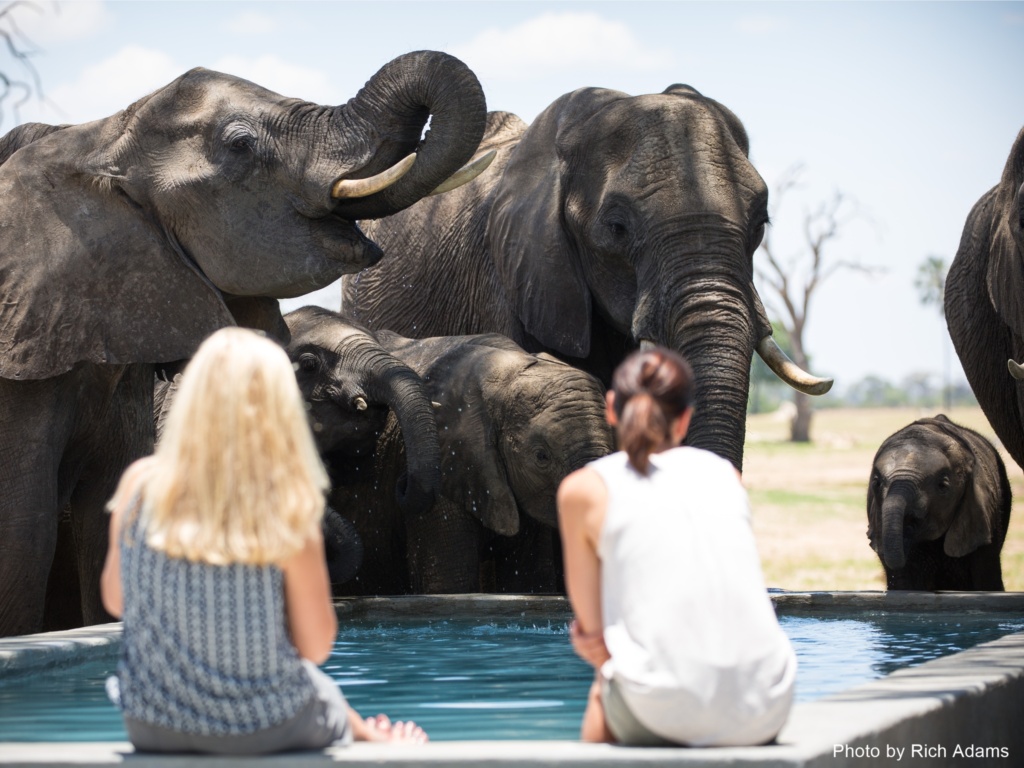 Everyone on the deck – Tasimba members, pro guides and camp staff alike – stood in awe of the amazing closeness of these magnificent creatures right in our midst.  Until you have been this close to elephants, you just don’t realize how huge they are. Their large fan like ears flapped lazily to cool them in the hot afternoon sun.  Their tusks, some partially worn from digging for roots or minerals, defined their seniority in the family.  Their eyes, seemingly soulful and rimmed with long, lush lashes kept a watchful look around them.  Only when they had all had a good long drink did they move off together to the pan.

And the two lucky women in the ringside seats sharing the pool with the elephants?  They sat in spellbound silence completely absorbed in their own special, never-to-be-forgotten connection. Because our members are always the only guests in the entire camp, moments like these feel even more precious because they are exclusively ours – another unique benefit enjoyed in the life-changing Tasimba experience! 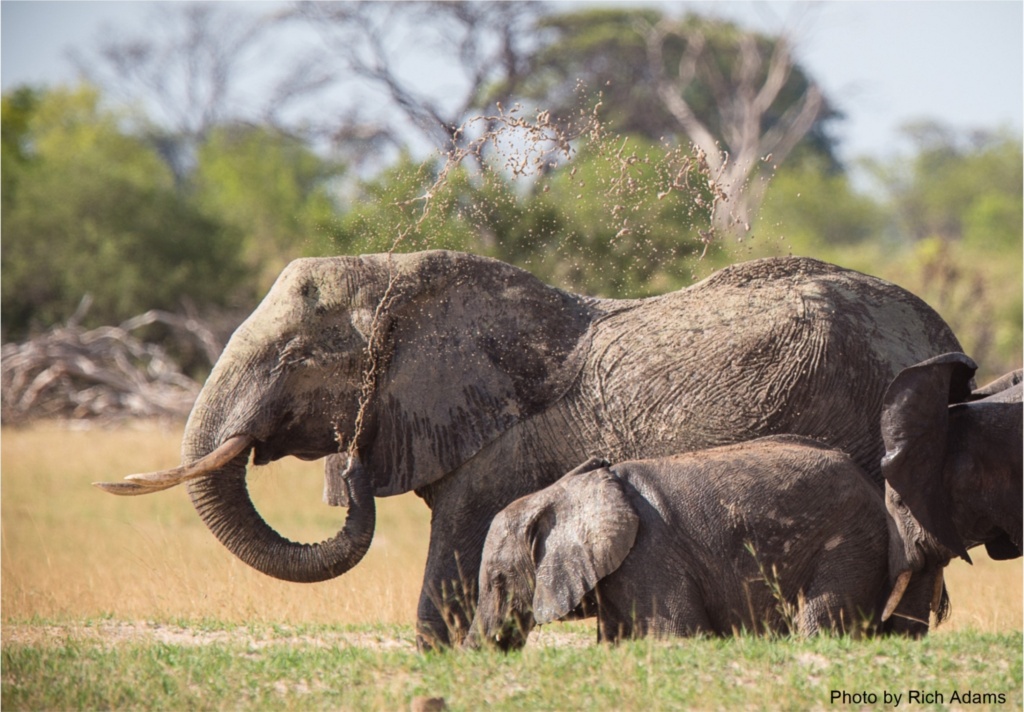 – magical, once-in-a-lifetime memories among some of planet earth’s most diverse and unique species.